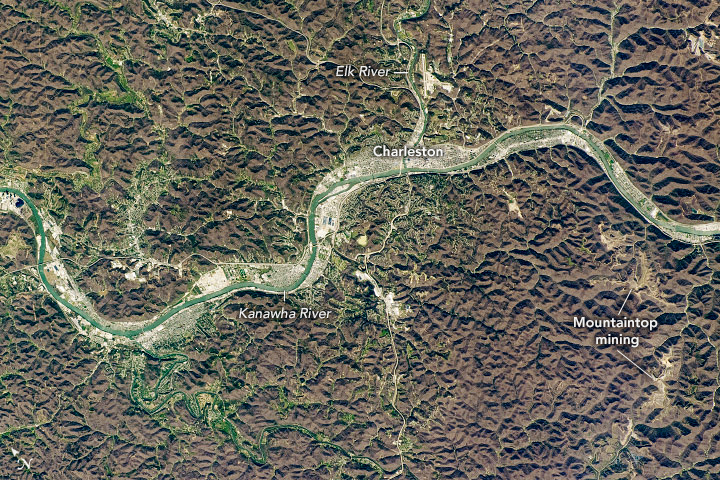 Charleston, the capital city of West Virginia, is nestled in the Allegheny Mountains, one of the smaller ranges running through the Appalachians. The brown-hued, textured areas—not yet painted green by springtime—highlight the ruggedness of the surrounding terrain and allow local cities, roads, and mines to stand out in this photograph taken by an astronaut from the International Space Station (ISS).

Established in the 1700s, Charleston sits in a river valley at the confluence of the Kanawha and Elk rivers. The Kanawha River, named after the Kanawha Native American tribe, is a tributary of the Ohio River and is only about 160 kilometers (100 miles) long. Due to the region’s undulating topography, much of the Allegheny Mountain Range was historically difficult to travel across as early European settlers headed west. Throughout Charleston’s development and expansion, its riverside location made it a welcome resting spot for settlers along their route west, and many chose to stay in the region permanently.

Salt works, logging, and mining would become the city’s leading economic industries. Brine has been pumped from wells in this area for its salt content for hundreds of years. Logging became prevalent due to the abundance and variety of trees in the mountains.

Underground coal mines, which date back to the early 1800s, are scattered throughout West Virginia. In the 1970s, coal operations started using a process known as mountaintop mining: the removal of rock and soil from mountaintops to reach coal seams. Since the process starts with the complete deforestation of an area, such surface mines can bring large-scale changes to the landscape and environment.

Astronaut photograph ISS062-E-124061 was acquired on April 3, 2020, with a Nikon D5 digital camera using a 290 millimeter lens and is provided by the ISS Crew Earth Observations Facility and the Earth Science and Remote Sensing Unit, Johnson Space Center. The image was taken by a member of the Expedition 62 crew. The image has been cropped and enhanced to improve contrast, and lens artifacts have been removed. The International Space Station Program supports the laboratory as part of the ISS National Lab to help astronauts take pictures of Earth that will be of the greatest value to scientists and the public, and to make those images freely available on the Internet. Additional images taken by astronauts and cosmonauts can be viewed at the NASA/JSC Gateway to Astronaut Photography of Earth. Caption by Sara Schmidt, GeoControl Systems, JETS Contract at NASA-JSC.

Mitsui to sell stake in Mozambique coal mine, logistics corridor…

Cork homeowner (82) ‘blown away’ after being gifted…

For Trudeau, Life After Trump Is Off to Surprisingly Rocky…

Executive Order on Protecting Public Health and the…

Mitsui to sell stake in Mozambique coal mine, logistics…